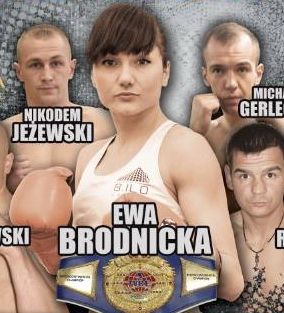 On April 26 at the Galeria Korona in Kielce, Poland, local prospect Ewa Brodnicka will fight for the vacant World Boxing Federation (WBF) Womens Intercontinental Light Welterweight title in what will only be her fourth professional fight.

Brodnicka, 3-0 (1), will take on the younger but much more experienced former European title-challenger Kremena Petkova from Bulgaria, who brings a 10-9-1 (1) record to the table, and will surely be in with her biggest challenge over ten rounds.

Now 29-years old, Ewa Brodnicka turned pro in February 2013 and won a decision over Pasa Malagic from Bosnia & Herzegovina. Six months later she defeated fellow Pole Klaudia Szymczak, also on points, before she got a first round stoppage over Pavla Vatavova from the Czech Republic this past February.

Kremena Petkova (21) has boxed professionally since June 2010, and fought the much superior opposition. In December of last year she lost on points to Nicole Boss in Switzerland, in a fight for the vacant European Lightweight crown and has since returned with a victory over former world title-challenger Galina Gumliiska.

Tymex Boxing Promotion, who handles the career of Brodnicka, is taking a gamble by matching their fighter this tough in a title fight at such an early stage of her career, but there is confidence that she can rise to the challenge and put herself in line to challenge WBF World Champion Rola El Halabi in the not too distant future.

The Brodnicka vs. Petkova WBF Intercontinental title fight is the main event of a show that will feature an undercard involving local established names and future stars.